What a cool story. So happy for them.

What a wonderful story. I am so happy to hear that he was able to find his brother. I know that this means a lot to him. Hope Steve invites him to the Cocoa Play House for a show.

I am one of the lucky people who associates with Stephen Cassidy through work. This article has brought tears of joy to all of us. What a surprise! I didn't even know he was adopted. He is such a warm, hard-working, and fun-loving person. The best to his entire family.

what an amazing story. it's great to hear how what seemed so horrible back then, a single mother, turned into such a happy ending.

I loved this story. Sure reflects on a time when unwed mothers to be were sent away temporarily? So awesome to read a high five ending. The holidays will sure be different regardless of the religious beliefs. My twin bros are super close and that is how it should be. God bless you both.

I also have the pleasure of working with Stephen Cassidy- the excitement on his face when he told us his birth family had been located was amazing! I'm so happy your paths have met. I wish you all many more precious family moments! God bless the beginning of two brothers named Stephen!

I also know Steve Cassidy through work and want to wish the brothers many more happy family reunions! Congratulations on finding each other!

Wonderful story and even makes me want to locate my birth family more as an adoptee. Can you please tell me how to get in touch with the woman who did the search/reunion? Thank you so much. Sincerely, Kym Everson

Very cool! They DO look alike. I wish them and their families the best and many more years of happy memories!

I am so happy for both Stephens. God is in the details of our lives enough to allow the paths of your lives to merge after such a long time. Thanks for sharing this with us and very nice article.

I'm Steve Olch's cousin from Oregon and heard the news from my brother the day after. Very happy to here the good news and happy ending!

God is sure able to make beautiful omelets out of scrambled eggs! Praise and thanks be to God for your beautiful story. Thanks for sharing with all of us.

Hello, I am the professional adoption searcher who had the pleasure of searching for Stephen Cassidy's birth family. I do this everyday, and to see this wonderful story put into writing was so touching and brought tears of joy. If anyone is interested in finding their birth family or a missing relative or friend, you may contact me by phone or through my web site. The phone number is on the web site. theadoptionspecialist.com is the web site. I am located in Long Beach, California.

This reunion has been a wide spread blessing to so many. I am personally grateful to their courage and boldness to seek each other, accept and love each other and combine their blood and adopted families. The gratitude extends into my life when I was encouraged by the Stephens to search for my own sister, their first cousin. My search is over! I have found her! Met with her and am in the long process of establishing a relationship, connecting the dots and uniting two more families. Thanks Lisa!

In the pouring rain

The Cassidys drove to Olch's Mission Viejo home. They walked up the pathway. Olch was pacing inside.

Then Olch opened the front door.

The two Stephens shook hands, then embraced. Both of Olch's children Christin, 15, and Shane, 11, couldn't believe how much their father and uncle looked alike. Family pictures were brought out, and there was a lot of talking. Then Olch unveiled his first surprise – two Angels jerseys with "Stephen" on each.

Then they went to Angels Stadium.

During the game, the Jumbotron displayed "Welcome Steve x 2, a new beginning."

Friday, the two brothers met for the first time.

Olch wanted to show his new brother what his life was about and had made special plans. They would meet at 5 p.m. at his home in Mission Viejo and head to an Angels game 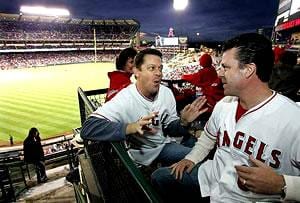 ."I get emotional and teary-eyed," Olch said hours before the reunion.

Cassidy, too, was nervous. Catherine, his wife, said he'd been crying off and on for two days.

Exactly why Cassidy was given up is vague. His mother was single at the time.

Cassidy grew up in Santa Ana with his adopted family and four siblings.

"I was always grateful that I had been adopted," said Cassidy, who grew up in The Church of Jesus Christ of Latter-day Saints.

He was raised with family camping trips to Idyllwild, the Sierra and frequent weekends at the beach in Newport.

He attended Fullerton College and graduated with a business degree from Cal State Fullerton. He followed in his father's footsteps and took a job at Rockwell, becoming a logistics planning analyst there. The naval logistics contract he was involved with moved to the Kennedy Space Center in Florida. He and his family have lived in Rockledge, Fla., for 18 years. He has two daughters, Sarah, 18, and Grace, 15.

They were brothers. Not only did they share a first name, they both spelled it "Stephen."

"He sounded relaxed, his voice was a little higher pitched, and he had longer pauses in his conversation," Olch said. "When he said he worked at the Kennedy Space Center, I'm thinking he's an engineer. I envisioned someone very conservative, pens in his pocket and glasses.

The two decided to exchange e-mails and photos.

"We just fell off our chairs," said Cassidy, when the first e-mail from his brother arrived, its subject "The beginning of two brothers named Stephen."

:We looked so much alike." 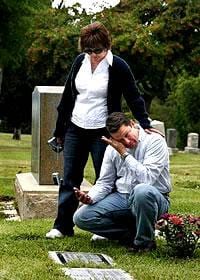 An avid Los Angeles Angels of Anaheim and Mighty Ducks fan, he loves going to games.

It was after a game in March that Olch's past caught up with him.

He had attended the Ducks' final regular season game and was on "cloud nine" because they were heading to the playoffs. When he got home his answering machine showed he had seven messages.

He thought the calls were from a persistent salesman.

"This is Stephen Cassidy calling for Stephen Olch, Please call me back," the message said.

Olch slept in. The phone rang again. It was Stephen Cassidy.

"I've been seeking out my birth family and I believe we are brothers," the voice on the other end said. 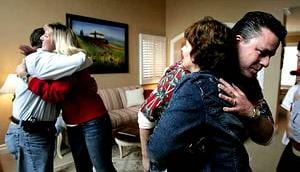 Stephen Cassidy, who lives in Florida, had found his birth parents' names and had given the information to Lisa Townsend, an adoption specialist in Southern California. She sent him an e-mail with the results.
"David Olch, this is Stephen Olch, your son," he said. Dead air hung on the line.

Finally, David Olch said, "How are you?"

It was an awkward conversation that launched Stephen Olch on a journey to find the details of his family tree. His journey ended this weekend, when he confirmed that the Olchs had branches that he didn't know existed.

Stephen Olch's journey started when he drove to Tucson. He met his father in a park.

They sat at a picnic bench and talked for three hours. They talked about their lives. David felt guilty and told his son he left because, "he didn't feel wanted."

At the end, Olch asked his father a delicate question: Did he have any other kids?

David Olch denied there were any others. Still, Stephen Olch had doubts. A few years later, he confronted his mother, and Winona revealed her deepest secret.

Yes, there was another child. A boy. He was born 21 months before Olch.

Stephen Olch was born Oct. 22, 1962, in Lakewood. He lived for a few years in Westminster, and he attended Westminster Christian School and Dr. Robert Schuller's first church in Garden Grove.

He was a skinny kid with crazy, wavy brown hair. He was popular at school and spent most days playing outside – skateboarding, playing baseball, building forts and catching frogs in the local creeks.

Olch is now vice president for Knox Attorney Services – a company handling legal documents. In 1995 he opened the Orange County office. He is married and has two children.

MISSION VIEJO - He was the man in the big car.

That's Stephen Olch's memory of his father, who left when he was 2 years old. It wasn't until Olch's daughter turned 2 that he decided she should know her grandfather.

It was time to break decades of silence.

Olch prodded his mother, Winona, for details. After a lot of crying, she told her son that she thought his father lived in Arizona.

Olch got on the computer and searched for David Olch. He found a number in Tucson.

He nervously dialed the number. When a man answered, he still wasn't sure if he had the right number.